Air operations in the first 24 hours after a disaster hits are often crucial.

Type of operations in first 24 hours

Some disasters have no warning.  After the Indonesian tsunami of 2006, about 80% of deaths were in the first 24 hours. There were 18% more in the next six days.  And 2% in the subsequent week.  Mozambique is in the cyclone belt and so severe storms can strike with no warning.  The country is also on the end of the Great Rift Valley and earthquakes can also strike quickly.  Life saving operations are a hugely important air operations in early response.  Evacuating people is possible but it is more efficient to take a doctor in, to set up a clinic.

Some catastrophes have a longer build up – like floods.  River levels are monitored in key places.  But at some stage rivers can burst their banks.  Operations in the first 24 hours are critically important there too.  24 hours is inside the incubation period of cholera, dysentery, typhoid and measles. A rapid response can help prevent a full-scale epidemic of follow-on diseases.  Helicopters can take assessors right to the people most at risk.  An early helicopter survey flight helps find the real hot spots.  All sorts of people need to survey the scene.  Then we can find the needs for life saving aid.

Droughts and famines often have much longer warning.  The UN has regional offices around the world.  They have regular meetings to monitor the food security picture.  They check the climate and the weather.  Some communities are hard to get to.  So the assessors may need a helicopter to do a quick survey deep in the savannah, to confirm their findings. So all disaster response operations need to be quick.  This is the hardest thing to do.  We need to be ready to do operations that save lives.

How do we respond in the first 24 hours?

Once the picture of the disaster becomes clearer, decisions can be made.  As an early medical response is a key part of life saving operations,  people and key medical supplies must be flown in.  Cargo flights play a key part in disaster response.  They can take in sanitation kits (as we did in 2007) or food (as we did in 2013).  It seems unglamorous, but cargo flights are a vital part of disaster response.  We need to get the right aid to the right people.

Wings’ purpose is to save and sustain lives. So we respond when asked. It is so important that Wings has a year-round presence in South East Africa.  Research shows when weather-related disasters are likely.  But earthquakes or epidemics do not work to a calendar.  So, to respond quickly to arising operations you must be nearby. 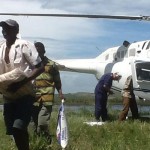 Our record in disaster-response operations

Mercy Air, an ally of ours, doing underslung operations

We put ourselves on high alert for disaster operations in the first four months of the year.  This is when the people need greatest support.

In 2014 and 2015, we flew crop spraying missions to make food in famine affected Southern Africa.  In 2017 we provided a regional response.  We helped deliver food in Malawi, Wings put pumps into farming communities in the Zambezi delta in the drought, and it helped Hover Aid rescue people in Madagascar.  In 2019, we funded the delivery of 46 hours of helicopter aid after Cyclone IDAI.  For more detail, look at our annual reports.

Why not look and see?

Wings’ values say we should be safe, and show commitment and integrity.  Also we seek to be flexible and efficient.  Why not look at how we do disaster response?

For example, the long-term records show that over the last 40 years, each year an average of 550,000 Mozambicans needed relief from disasters which struck in January.  Sixty million people from Mozambique, Malawi, Tanzania and Zambia have been affected by disasters in the last 20 years. That’s an average of three million people a year!  These are very poor countries.

Rapid operations is a team game.  It requires great links with the government, with the  aviation authorities and with people on the ground.  We thank our allies so much for their help.  Our 2008 video is about surveys and might be helpful.  In it you can see us meeting with Oxfam on a bush strip.

All this takes resources.  If you want to help us why not donate here? Or contact us and ask for more information.  Thank you.