Cyclones can lash the coast of Mozambique. Pretty much all of it.

Where do cyclones hit?

In our period of interest in this part of Africa, we have seen cyclones regularly between Inhambane and Quelimane.   In 2019, a most unusual and intense cyclone hit the northern port of Pemba.  It, Cyclone KENNETH, was as far north as anyone has seen a Cyclone in Mozambique.

The coast is very varied.  So cyclonic storms can hit the island national parks off Inhambane. Or the protected areas of the Bazaruto Archipelago. Even the Quirimbos Archipelago, in the far north, has been affected.

What do Cyclones do to Mozambique? 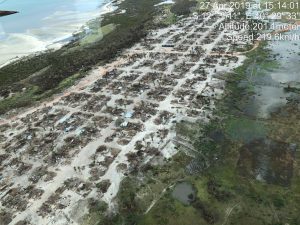 Storms damage coastal towns.  Cyclone IDAI hit the port-town of Beira on Friday 15 March 2019.  It picked up the sand of the beach and blasted the people and the outside of most homes.  Smashing windows and uprooting trees.  It tore through off roofs of the town.  Causing many families to relocate because of the rain pouring through the roof and windows.  All this for 600,000 people.

Or these tempests can hit offshore communities.  There the peoples of the islands off the coast have their homes destroyed.  Like here.  Want to know more, why not contact us? 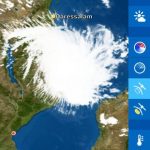 Once they cross the coast, cyclones pour water into towns. They flood the fields of rural farmers.  Destroying crops.  Creating new lakes.  After IDAI the lake was 100 km north south and 50 km east/west.  5000 square kilometers!  The lions, rhinos and other protected animals in the Gorongoza National Park were displaced.  Also the black mamba snakes swam to survive, making the water even more hazardous.

All this as the people swam for their lives. 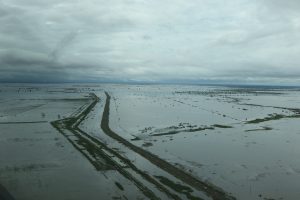 IDAI – the main road, the railway and the power lines. Courtesy of Mercy Air/Wings Like Eaglessought clumps of higher ground.  As they sought to get away from the lake.  About 500,000 of them.  Hunting dry ground to survive.

As they fled, these farmers had their kraals destroyed. Had their animals drown.  And their crops were ruined.  Their tools swept away.  Just before their harvest.

Worse still, the road and rail links and the power lines are cut.   If you want to help us respond why not donate now?

As they travel inland, these storms lose their violence.  But they also lose their water!  In 2019, IDAI hit the mountains on Mozambique’s western border.  The rainfall threatened to burst a dam.  It caused landslides in Zimbabwe.  Worst still, the water emptied into the hills.  The river tributaries accumulated this runoff.  These flows combined and they tore down the hills.

The resulting 11 meter tidal wave cascaded down the water courses of the Buzi and Mossurize Rivers.  Breaking bridges.  Isolating the

IDAI – the people survive. Courtesy of Mercy Air/Wings Like Eagles

Worse, the populations of Buzi and Chibabava districts were flooded from their farms.  The wave opened out and swept under the tree canopy and hit rural villages and huts.  Breaking legs, blasting whole trees into farmers and children. Destroying homes.

The wave finally found the town of Buzi.  There is forced the town’s population onto their first floors.  Onto their roofs.  And driving those who didn’t have roofs left, or first floors, into the football stadium.  To survive.

That’s what Cyclones do!  And we have a track record of helping millions of people to recover.  Have a look at our reports.

Then what?  A little in advance means we can respond more quickly.  Why not donate?   Go on.  You really can help!