Our responses depend on the type of disaster

Our responses focus on aircraft, especially helicopters. So the types of disaster we have responded to are:

If you’re interested in the types of disaster that we think about, why not look here?

At Wings Like Eagles we specialize in our responses to disasters in Southern Africa.  We have three response approaches. 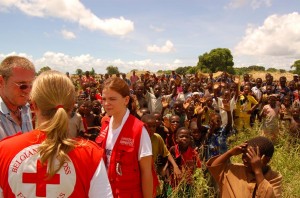 Life-saving is our top priority after a disaster.

Nature is harsh in Southern Africa. Rural communities can often see their crops withered under the relentless sun or washed away by flash floods.  Life saving may involve pulling people out of trees or medical flights.

As soon as the fragile infrastructure of a community is unbalanced, epidemics can strike. Dysentery and cholera come first, with an incubation period of 5 to 7 days. Hot on their heels typhoid may follow, with a 21 day incubation period. Malaria and measles may be waiting patiently to strike.  We need good surveys to find the people needing life-saving services.

And yet one nurse with a cool box full of vaccines can save a rural township from typhoid or measles. One sanitation expert can help avoid an outbreak of dysentery or cholera. And the most direct way to reach the point-of-need quickly is by helicopter. 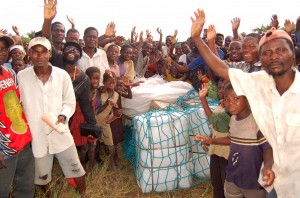 At Wings we are happy that our small non-profit work comes second to larger and better known aid organisations.

These groups – such as the United Nations, Red Cross or Red Crescent, Oxfam, Save the Children and World Vision – have a global role to play and we support their and others’ efforts wholeheartedly.

We want to get the right aid to the right people.  The big and little players all need surveys to target their efforts and then they need cargo flights to deliver their aid.

But it is impossible for responding organisations and groups to justify have a helicopter waiting in South East Africa.  It’s just too expensive.  And yet in the vital, early days of a disaster an aircraft can be fundamental to their disaster response work.

So, Wings Like Eagles is the solution.  Because we focus our entire year on maintaining a helicopter presence in the area, it is reassuring for the bigger charity organisations to know that a safe and nimble, local flying team is available for them whenever they need it.  Why not donate today? 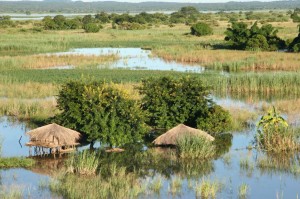 Look at our responses to this!

Helicopters have only two other alternatives for disaster response to disaster zones: lorries and boats. But in times of drought, a lorry might take two days crawling along rutted roads in the blazing heat.  A helicopter can make the same journey in an hour.  And when there are floods, the supply of boats that can navigate fast flowing rivers is small.  Let alone boats that can cover the large distances between communities.

With our fast response we aim to provide access for all.  When minutes count, Wings can collect medical staff and rush them to the real needs. The hours saved can slash the death rate and ease suffering for those afflicted.  And its not just medical aid that can be targeted.  Our surveys have also targeted millions of dollars from the World Bank for road and bridge reconstruction.

Or our response can include flying the world’s media in the area, to make sure the UN, the world’s governments and us as individuals are aware of the disaster. Then we can all respond.  So we can help with fund raising too.  You may have heard our CEO on Radio 4 with Fergal Keane in 2019, for example.

So what have we done – the early responses

In 2007 we sent a team to the  Zambezi after Cyclone Favio.  The team was a helicopter, pilot and ground coordinator.

In 2008, we established a Wings HQ in Maputo, the capital of Mozambique, in order to be able to respond quickly.  But the recession forced its closure.

In 2010, we supported Air Calvary in their response to the Haitian earthquake.  And 3 million people were affected, roughly 250,000 lives were lost and 300,000 people were injured.  Also our CEO went to Mozambique to prepare for a disaster response.

In 2011, we were involved with the move of the Hope of the Nations helicopter to South Africa.  And we saw its subsequent preparation for disaster response operations.

Maturity as we get into our stride

In 2013, we responded to the floods on the Limpopo by sending that helicopter, a volunteer pilot and our trustee Clive Langmead.  And there’s a video of that response too! 170,000 were affected.

In 2014 we put the helicopter on crop spraying to help produce food for the regional famine.  And those Wings’ crop spraying operations continued through disaster season 2015.

In 2017 we made our first regional response.  Cyclone ENAWO hit Madagascar.  Also people in Malawi were starving, so we funded food supplies for them by 4 by 4s.  And there was a drought in Mozambique.  So we funded some water pumps on the Zambezi.

In 2019, we responded to Cyclone IDAI in Mozambique.  About 1.8 million people were affected.  We also supported Mission Aviation Fellowship in their response to Cyclone KENNETH, the most violent and most northerly cyclone ever to hit Mozambique.  The numbers were smaller but the impact was more focused and villages were completely flattened.

In 2021, Wings helped Mercy Air and the UN in the immediate response after Cyclone ELOISE.  We also prepared for more downstream problems from the heavy rain.

How do we make our responses?

Costs add up.  The pilot, fuel, insurance and maintenance costs means that we need to attract donations of $1000 per flying hour.

President Obama’s campaign for the White House showed what can be achieved by many people giving small sums. So any donation, however small is really helpful.

So any donation is welcomed.  We need your help to continue offering our disaster responses.  Please donate now?

We most often partner with Christian based air organisations like Mercy Air and Mission Aviation Fellowship. So they are trusted partners. And we thank them! Please join our great team by donating today.

We always work closely with all responders whenever we can. In 2019, we worked closely with the Red Cross, Medecins Sans Frontieres, Samaritan’s Purse, and Chinese, Brazilian, French and UK government responders too.