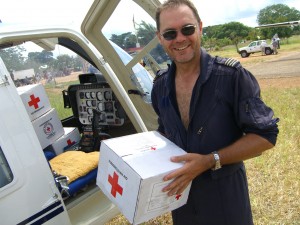 Pilot Bob Gillan of Hope of the Nations is delivering non-food items. He is helping the needy on the Zambezi in 2007.

Non-food items are things like hygiene packs.  Cooking pots.  Buckets allow water to be collected and purified. and the food to be cooked.  The pilot has to help with unloading in a smaller helicopter.

Smaller helicopters are faster and their pilots together with expert disaster assessors can conduct rapid surveys that help target the aid most efficiently.

About 200,000 people of Mozambique were affected by the Zambezi floods in 2007.  Many organisations helped the Government of Mozambique and its disaster relief agency, the INGC, coordinate the delivery of aid.  Our response started after cyclone Favia had gone through and we were based in Caia on the Zambezi; with Bob Gillan and Mark Mitchell living in tents.

The best way to deliver bulk food is with big helicopters.  For example, the UN World Food Program had contracted some large Russian helicopters – for example the famous Mi-8 – in the Congo.  These big helicopters came.  They can lift much more than a Jet Ranger.  But they use much more fuel and the down draught from the rotors can destroy fragile village huts.

A team effort with the pilot

All disaster response is a team effort.  This time, logistics coordination was done by the INGC part of the Government of Mozambique, and the UN World Food Program.  Wings Like Eagles joined with

Hope of the Nations,

They and many others helped us make this disaster response effective on the ground.

Our role was to provide a ground coordinator: Mark Mitchell.  He went to the planning meetings, whilst the Hope of the Nations and Mercy Air pilots were flying.  Mark also helped with the under slung loads and their pick-up. Helicopter sling work is a specialist flying.  And we learnt many lessons from the experience. 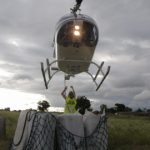 I’m going for it

We also met pilot Andrew Shipton for the first time.  He was a pilot for NAC at the time, and they also responded.

It is the INCG is the department of the Government of Mozambique that coordinates disaster response.

Why not support us so we can do this again?