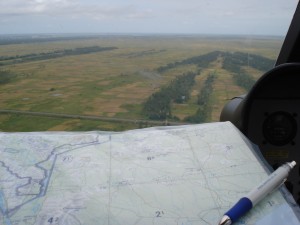 Adrian Nance with the map supporting Wynand Malan in Jet Ranger 5H-XSH, with the helicopter flying over Mozambique on their way south on the 1700 mile (2700 km) ferry flight.

Wynand Malan is a highly experienced pilot with over 10,000 hours of helicopter flying experience.

Experienced pilots are at a premium.  They can keep helicopters flying safe over floods by flying at the best altitudes if defects occur.  They know each other and that builds trust when weather conditions are marginal.  The community of experienced pilots in Africa is quite small.

On the first day, the team flew from Dar es Salaam to Pemba in north Mozambique.  Then they went on to Nampula for the first night.   In the disaster season the rain storms can be about 20 miles across.  Northern Mozambique has amazing sugar loaf mountains which can be completely invisible in rain clouds.  They were flying near the rain.  So they had to be careful.

On the second day they flew from Nampula to Quelimane for fuel.  Then they went on Beira and then into Vilankulos.  They made it just in time for for last light.  In central Mozambique the terrain is flatter and more fertile.  There is a big National Park west of Beira and there are plenty of animals around – including herds of buffalo and crocodiles lazing by the rivers.  The views were awesome.

Vilankulos is a tourist spot and offshore there are islands with specialist resorts.  The islands provide access to some of the best diving in the world.  The Mozambican Channel has Manta Rays, other wonderful fish and amazing reefs.  No wonder it is popular.

The country is amazing and helicopter flying over it is spectacular.  Have a look at the photo album on Facebook.

The final day was an amazing transit from Vilankulos across the Greater Limpopo Trans-frontier Park.  Then they flew over the Kruger National Park and stopped for fuel and customs at Kruger International Airport.  The final leg was a delightful trip over South Africa to the NAC Hangar at Rand Airport.