Home Fundraising Speaking out for aviation in disasters

Speaking out for aviation in disasters Posted April 28, 2012 by Adrian Nance

By kind invitation our Chief Executive Adrian Nance has been speaking out about aviation, and our work in disasters.

Speaking Out – the RAeS 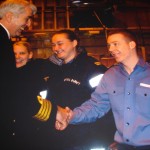 He was asked to talk to the Royal Aeronautical Society (RAeS) on 25th April 2012.  He was speaking out about his time as Captain of the 5th HMS ARK ROYAL . It ended his 27 years of aviation experience in the Royal Navy. He captain-ed one and trained the other two aircraft carriers.  And he showed how a busy aircraft deck can be managed flexibly.  Flexibility is one of the core vales of Wings Like Eagles.

Adrian was also asked to speak out to the South Hampshire Historical Aviation Society. 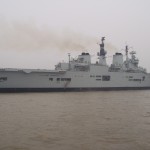 Speaking Out – about HMS ARK ROYAL

This ‘speaking out’ had more of an historic flavour. The Fleet Air Arm has mastered the discipline of naval aviation since 1937.  It did the pioneering work as the Royal Naval Air Service.  The Royal Navy introduced the world to many aviation innovations.  For example, the first launch of an aircraft from a ship underway;  was by the Royal Navy.  The first ship built as an aircraft carrier; was built by them.  They invented steam catapaults.  And they invented angled flight decks.  They also invented mirrored landing sights and so much more.  Adrian saw many of these first hand back in 1974 when he served on the 4th HMS ARK ROYAL.

Because this is a highly demanding aviation environment.  It has allowed the Navy to face many challenges to safe and efficient aviation.  Through innovation and teamwork they have mastered many of the problems.  And fixed wing aviation is perhaps the most demanding.  But helicopters too are challenged by this highly variable operating environment.  Mixing them together is challenging and requires skill and great flexibility in the operation of an aircraft carrier.

This skilled and flexible approach is a key part of how we help innovate in disasters.  Each disaster is different.  And we can speak about good ways to respond.

Adrian can also talk about his current work

Wings has a fascinating track record.  So look at it’s set of disaster responses. You might be interested by one story.

And starting a charity might interest some.  Or even operating a helicopter in southern Africa.

So, why not have a look at his online biography to see if there is a connection.

If you want to have Adrian speaking out to your group, why not contact us?

We normally ask you to make a donation to the charity and to pay for his basic travel expenses.