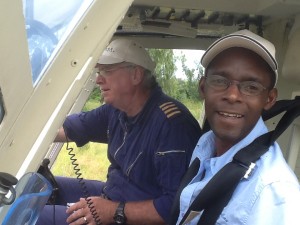 In Mozambique we have a key ally, Sergio Ido. He has been a friend of ours since 2007.

In 2013 he was Wings Like Eagles’  translator and liaison officer for the flood on the Limpopo River.  Our disaster relief operation was run from Xia-Xia in Mozambique.  We delivered aid to some of the 170,000 people hit by the flood.

Sergio Ido is a great guy and we wish him well!

Sergio Ido met Adrian Nance in 2007 at the Casa Koinonia Guest Home.  It is in Maputo, which is the capital of Mozambique.

Sergio Ido is also the founder of AeroVisao an aircraft operating charity in Mozambique.

In 2013 Sergio Ido once gain helped us with his language skills.  Those skills helped us get the aviation clearances we needed.  He continues to be a great help to us.

Sergio was born on the Zambezi river. He understands so many of the local issues.  He trained as a pilot and flew as trainee co-pilot with Mission Aviation Fellowship.