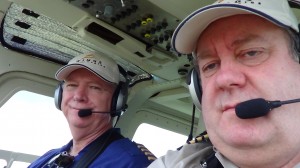 This is our disaster response team getting together.

Clive Langmead (a Wings Trustee) meets Andrew Shipton (our helicopter pilot) to take the helicopter to Mozambique as part of our response to the disaster reported by IRIN News.

What was the response team needed for ?

In 2013, about 170,000 people were affected by the flood on the Limpopo River.  Hundreds of thousands of people live on that flood plain in Mozambique.  The plain is wide and flat.  So when the Limpopo bursts its banks, large areas of land can be inundated by floods.  Then large numbers of people are forced off their farm land and forced out of their villages.  So they go up to higher ground.  Sometimes the disaster affected people need to be brought together in camps.  Concentrated they can be more easily fed and helped.

The Government of Mozambique is responsible for the disaster response in their country.  They draw their response team from across the government.

The UN is also part of the team.  They may activate the cluster system.   Clusters allow response team specialists to draw together.  Then they can coordinate their assessments of the hazards and the needs and they can coordinate their responses and target the most needy.  The logistics cluster is the one that we focus on.  It is normally chaired by a senior World Food Program (WFP) representative.  The WFP is the UN agency which is responsible for distributing food aid.

The previous very large flood in the Limpopo valley was in the year 2000.   Even more people were affected then.  So the response team was much bigger.   But much of the major response was not as quick as it might have been.

Do we need a big response team?

No, we don’t need a big team.  But you do need the right skills.

Andrew Shipton (pilot) Clive Langmead (ground coordination) and Sergio Ido (translator and liaison) were our disaster response team for the 2013 flood.  These three men operated from Xai-Xai in Gaza Province in Mozambique, and MAF Mozambique‘s Dave LePoidevin and Mercy Air‘s Matthias Reutter were also part of the response, responding for their own organizations.  They also helped us.  It was a great disaster response effort.