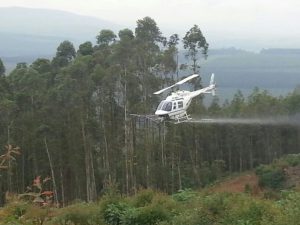 It’s called food insecurity by the professionals.  The UN Food and Agriculture Organisation said that 153 million people were food insecure in 2014/2015.

‘Spraying crops continues’ means that in 2015 the helicopter flew 224 hours.  The aircraft delivered 470 tonnes of stores to help produce more food.  It covered about 15,000 hectares of farmland.  The result was over 9,000 extra tonnes of food.  What a result!

We think that this effort produced enough calories to feed 45,000 people for a year.  That’s why we did it.

Food has to be moved at the right time for the needy.  So we do not claim that we fed that many people.   We are just trying to explain why spraying crops continues.  We are trying to give you an idea of what sort of result we achieved.

What makes these famines happen?

There is a strong current effect in the Southern Pacific and every so often the current reverses.  It is called the El Nino Southern Oscillation or ENSO.  It’s an oscillation because it reverses every few years.  About 7 years or so.

The ENSO has a big effect on the climate.  It changes it. And it especially changes the climate in the southern hemisphere.

Sadly it’s not that simple. The floods and food shortages are becoming more local.  That makes it harder for us to choose what to do with one helicopter. But we said it was a tough problem.

Why not tell us what you think about what we do?  Or just donate to help us.   Be a supporter!