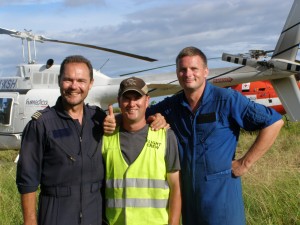 To help understand disaster response 2007, we will give a bit of background.

A helicopter-based disaster response team is needed when people are cut off by disasters.  It is not just floods that can do this.  Earthquakes, tsunami, mud slides and volcanoes can all isolate people when they are at their greatest need.

Why helicopters for disaster response?

Our research showed that nearly 60% of disasters were of these types world wide in 2005.  A helicopter response can be a key part of saving lives under these circumstances.

Life saving can be lifting people out of the hazard.  But more frequently it is much more effective to fly medical people in.  They can start an emergency clinic and start to see what the affected people need.

Helicopters also help get the right aid to the right people, as we call it.  This means surveys.  Flying disaster assessors around helps target limited amounts of aid most effectively.

So what was the disaster response 2007?

Within 48 hours of Cyclone Favio declining, we helped fly a helicopter to deliver life saving items for the Mozambican government, the UN and others.  The pilot was our friend Bob Gillan.

Our partnership with Hope of the Nations Tanzania was flying up to 9 loads a day, totalling over 4.5 tonnes to deliver shelter, bedding, mosquito nets and cooking kits to those isolated by the flood.

Here are Bob Gillan, the Hope of the Nations‘ pilot with Mark Mitchell and Matthias Reutter helicopter pilot for Mercy Air.

We were delighted to meet Mark Mitchell who acted as ground coordinator for us and for Mercy Air.

He helped ensure the safe loading of 29 tonnes of stores for those cut off by the floods.  That included working to prepare under-slung loads.

That was the power of a good team for disaster response 2007!

Wings learnt so much from this our first operation.   We thank you and our partners for being part of it.

Mark went on to be our first Country Director.  He established our first foreign HQ in Maputo in Mozambique.

Why not contact us and find out how we work.

Or better still, why not become a donor and allow us to respond quickly again?