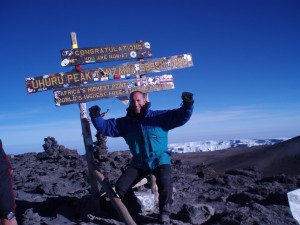 Climbing Kilimanjaro is not for sissies!  And so it is a huge thrill to report that David Wilson made it to the top of Mount Kilimanjaro fund raising for Wings Like Eagles.

Mount Kilimanjaro is in Tanzania.  Its facts are awesome:

Some people say it is the highest freestanding mountain in the world.

Most people need oxygen to climb above 3000 metres.  David did it without.  He also went up the most demanding trail.

Well done David, in a short break from being the Airside Manager of Gatwick Airport.  Our thanks also to BAA for sparing him. And to their charity for contributing.  We are so grateful!

See David in his day job at “Inside Gatwick” Series One Episode Five!  There he is responsible for clearing the runways and keeping one of the busiest airports in the world open.

And by doing this David showed his deep commitment to our cause.  Also he joined with other committed supporters, like:

Want to give too?

Why not join them in helping us?

Visit our Giving page.  For one-off gifts we have a secure link via Virgin Money Giving.

To help you decide we have published our Annual Reports.

Do you want to know what we do? Why not see how we helped cut of villages in Mozambique in 2013.