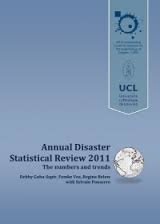 The Annual Disaster Statistical Review 2012 has been published by the Centre for Research Into the Epidemiology of Disasters in Belgium.

We used them first in working out where to start our disaster relief operations.

This UN body compiles all the disaster statistics across the world.  It is an un-glamorous task.  But an essential one.  We thank them for their independent review of the number and impact of disasters on this world.  We are sorry about last year’s cover – but there is no on line image of the new one!

The Annual Disaster Statistical Review 2012 reports 357 natural triggered disasters as registered last year. This was less than the average annual disaster frequency observed from 2002 to 2011 (394).  It also represented a decrease in associated human impacts of disasters in 2012, which were at their lowest level compared to previous years.

A significant number killed – 50% by floods

But contrary to other indicators, economic damage from natural disasters did show an increase.  Estimates placed the figure at US$ 157 billion (143 billion 2012 US $).

Economic damage is not an indicator that we use.  It depends on the country affected.  In developing countries, the economic impact be small. But we think that’s because the economy is small.   A low number may be a big percentage of a developing country’s GDP.   And that could have a really big impact on the whole population.

Why is the Annual Disaster Statistical Review 2012 important to us?

The Annual Disaster Statistical Review 2012 is important to us.  It helps us track the need for a rapid disaster response.  It comes five years after our initial work where we discovered that:

So this report confirms that we are still focused on the right things.

And this report helps us stay on track with our aims and objectives.

It also helps us keep our disaster response relevant.

If you want to help us with our response to needy people affected by these events then why not give to Wings Like Eagles?

Or, if you want to know more about our work , why not contact us?   Thank you.